In response to a growing homeless population in Malibu, the City has increased its measures to address homelessness and its impacts on the community. Some of those measures include development of a strategic plan, increased participation in events to aid the homeless, and the formation of a working group to strengthen cooperation between the various agencies and organizations providing assistance within the community.

In October 2017, the City received Measure H funding from the County of Los Angeles to develop its Homelessness Strategic Plan, which was adopted by the City Council on June 25, 2018. The City currently provides funding for an Outreach Team and a Housing Navigator, who works with the Outreach Team and landlords to help people experiencing homelessness get off the streets and into housing.

Community Volunteers Are Needed for the 2022 Homeless Count, January 26, 2022 in Malibu

Malibu community members are invited to volunteer to join the annual Homeless Count taking place in Malibu on January 26, 2022 when thousands of volunteers will help the Los Angeles Homeless Services Authority to conduct the annual street count of County of Los Angeles's homeless population. 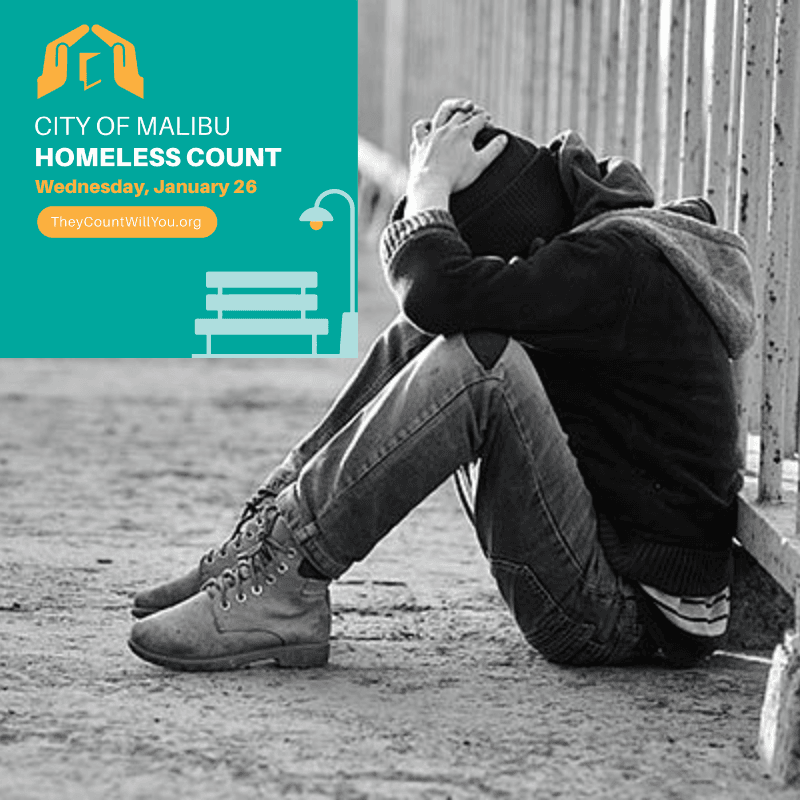 The 2020 Homeless Count results showed 66,436 people experiencing homelessness in Los Angeles County. It showed 239 homeless people in Malibu, an increase from 154 in 2019, and 155 in 2018. However, an informal count performed by the Malibu Homelessness Working Group done in 2021 showed 157 unhoused individuals in Malibu. The 239 counted in 2020 is thought to be due to a change in parking regulations outside of the City that pushed numerous cars and RVs into Malibu.

Learn more or sign up to volunteer at TheyCountWillYou.org. Volunteers under 16 years of age must be accompanied by a parent or guardian. For more information, please contact Public Safety Liaison Luis Flores at LFlores@MalibuCity.org or 310-456-2489, ext. 236.

Sign up to receive e-notifications by text and email to stay up to date with the City’s efforts to address homelessness, including meetings and events.

How You can help

October 29 – The majority of the people who were originally camping in the Zuma Creek area have now left, including two who are now housed as a result of the efforts by the Los Angeles County Sheriff’s Department (LASD) Homeless Outreach Services Team (HOST) in coordination with City staff. The LA County Department of Beaches and Harbors assisted by removing debris left behind. Under the requirements of their 30-day protocol for clearing large encampments (see explanation below), the HOST Team will begin clearing the Zuma Creek area of encampments starting November 9. Once cleared, the City in conjunction with Beaches and Harbors will close the area in accordance with the City’s Very High Fire Hazard Severity Zone Ordinance.

On October 27, Malibu’s Fire Safety Liaison in coordination with LASD, followed up on concerns about two possible encampments in the Big Rock area of Malibu. As a result, it was determined that one of the encampments was old and abandoned. However, a person in a nearby area was arrested on an unrelated outstanding warrant. Public Safety staff will continue to work with and support the efforts of Deputies and the HOST Team to clear encampments from our hillsides.

On October 11, 2021, the Malibu Council adopted a resolution that extended the declaration of a local emergency and continuing a program for reducing the risk of fires associated with individuals living unhoused and otherwise engaged in unpermitted and unregulated camping. The original Resolution was adopted on August 25, 2021 and declared that homeless encampments are prohibited in areas designated as Very High Fire Hazard Severity Zones (VHFHSZ), which encompasses the entire City of Malibu, and directed staff to collaborate with the Malibu Outreach Team, Los Angeles County Sheriff’s Department (LASD) and the LASD Homeless Outreach Services Team (HOST) to:

On August 25, 2021, in response to the adoption of the original resolution, City Public Safety staff met with LASD and HOST representatives to discuss a plan. HOST Team members worked with Public Safety staff to survey areas in Malibu and identify encampments that needed to be addressed. The most critical, in terms of fire danger, were in the canyons and the largest was identified in the Zuma Creek area. During these contacts, people who were living in encampments were advised that they could not stay and were advised of available housing and service resources, as required by the emergency declaration.

When clearing large encampments on public property, the HOST Team must follow a legal protocol, which typically takes 30 days. The protocol, or plan, must also be submitted to the Los Angeles County Chief Executive’s Office for approval. The HOST Team requested permission for a faster clean-up due to the fire danger, but the were denied. The City has also contacted local representatives, including Los Angeles County Supervisor Sheila Kuehl, requesting to have this date moved forward.

Most of the encampments in other areas including Malibu Creek and private property on the east end of the City have been addressed and are being monitored regularly by LASD, the HOST Team and the Malibu Outreach Team. As with any enforcement effort, what will pay off most are proactive and consistent actions. Residents are encouraged to continue to contact the City to report any concerns, and the City will continue to be responsive.